This latter is considered to be the more probable origin. What is certain, however, is that early breeders wanted to produce a smaller version of the Standard Schnauzer, not only for its utilitarian looks and make-up, but more particularly for its splendid character and temperament. Over the years trends and tastes change, but always with the breeding of Schnauzers, whatever the size, it has been paramount with breeders and devotees to preserve that very special Schnauzer character and temperament.

The Schnauzer is the only breed known to take its name from one of its kind to win a prize at a show. This was at the International Show in Hanover in 1879. The winner of the wire-haired Pinscher class was a dog called ‘Schnauzer’ and thus the present-day name for the breed came into being.

The noun ‘Pinscher’ was adopted when the first Pinscher Club was formed at Cologne in 1895, and referred to both the wire-haired (Schnauzer) and the smooth-coated Pinscher. It is thought to have signified a terrier. Around fifteen years before this, a breed standard for the short-haired Pinscher had been published. This proved to be the prototype standard for several German breeds that were emerging at the time, rather in the way that the Smooth Fox Terrier standard was the pattern for both smooth and wire-haired Fox Terrier, as well as several other British breeds.

The Schnauzer has always had an excellent reputation as a watchdog and the fact that he was vocal rather than aggressive with an ability to distinguish between a friend and a wrongdoer. 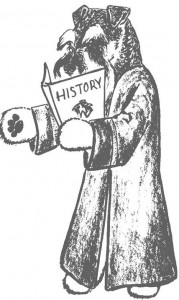 In the very earliest days, reference was also made to the breed as the rat-catcher dog and also to the Wire-haired Pinschers (Schnauzer) distinguishing features – the quality of its shorter, coarser coat and facial hair almost beard-like around the muzzle. Also, to the breed’s liveliness, friendliness and faithfulness. It was also noted that the ears and tail of the bred were frequently cut.

The Bavarian Schnauzer Club was begun in 1901 in Munich. This was to combine in 1918 with the Pinscher Club to form the Pinscher-Schnauzer Club. This is today still the premier authority under the Federation Cynological Internationale (F.C.I.) rules for Schnauzers (Standard,Miniature and Giant) as well as Pinschers, Miniature Pinschers and Affenpinschers. The Pinscher is a distinctive, smooth-coated, medium-sized German breed that should not be confused with the Doberman Pinscher which was officially recognized in 1900.

Originating in Central Europe, the recognizable Schnauzer type has been known for centuries in sculpture and art-form. It is thought to be represented in works by Albrecht Durer early as 1492. A representation of a Schnauzer also appears in a tapestry ‘The Crown of Thorns’ executed in 1501 by Lucas Cranach-the-Elder. At Stuttgart a statue, still standing today, of the ‘Nightwatchman and his Dog’ dated 1620, clearly depicts a Schnauzer.